Each year, tens of thousands of whales migrate along the California coast, and many move right through the Santa Barbara Channel or stop to feed around the Channel Islands. It’s one of SB’s most glorious natural events, and has put us on the map as one of the best whale watching spots in the world. PSC offers fantastic whale watching charters that bring you up close and personal for this experience of a lifetime.

The California coast is a migration superhighway for marine mammals, providing a path from the frigid feeding areas of northern Alaska all the way to the bath-like lagoons of the Baja Peninsula and similar warm, safe havens where whales breed and give birth. Species such as Pacific grays, humpbacks, blues, and fin whales all migrate along the coast and pass through Santa Barbara. Mothers with newborn calves will hug the shore for safety as they make their way north. The area attracts many other species of marine mammals as well, such as dolphins, seals and sea lions.

The Channel Islands are uniquely positioned right where two major ocean currents converge, combining the nutrient-rich cooler waters from the north with the warmer southern waters. This convergence creates a “dynamic transition zone,” and an abundance of life forms. Large marine mammals make the Channel Islands a stopping point to feed and rest as they make their long journeys up and down the coast.

PSC has amazing charters for whale watching that offer a one-of-a-kind, authentic Santa Barbara experience. We offer a half-day excursion that lasts four hours and take you either along the coast or out to the Channel Islands. Our full-day trip lasts about seven hours and tours the area around the islands more fully. Snorkeling gear is always on hand, and we load either kayaks or SUPs on board to further explore. Our goal is to create the best possible day on the water or you, period. Link to more information and reservations.

While we can never guarantee sightings of these creatures, you can increase your odds by noting the best times for each species.

Approximately 22,000 Pacific gray whales migrate along the California coast each year. Gray whales can reach up to 50 feet in length and weigh up to 40 tons. They live between 55 and 70 years, and feed mainly on crustaceans from the deepest part of the water (the benthic zone). They are dark slate-gray with gray-white patterns covering the body, and two blowholes on top of their heads which can create a distinct heart-shaped blow. They lack a dorsal fin, and their tails can span 11 feet across, tapered at the ends and deeply notched in the middle.

Beginning in late November, Pacific grays leave their main feeding grounds in northern Alaska and embark south along the coast through Washington, Oregon and California to reach the warm water lagoons in the Baja Peninsula of Mexico, where they breed or give birth to the calves that were conceived the year before. Mother and calf tend to hug the shore as they travel north, seeking out the kelp beds to stay away from predators, so they favor the Channel and the Islands.

Currently there are about 80,000 humpback whales worldwide who migrate up to 16,000 miles each year. Like the gray whales, they also feed in polar waters and migrate to warmer waters to breed and give birth. Their diet consists of mostly krill and small fish.

Humpback whales can grow up to 52 feet long and weigh up to 33 tons. They’re dark in color, have long pectoral fins and strong, stocky bodies. As the name implies, a humpback whale has an obvious hump on the back. The head is covered with large, bumpy hair follicles, giving the whale a “knobby” appearance. The tail is fluke-shaped, with wavy edges that taper.

Nicknamed “friendlies” by the locals at their southern breeding grounds on the Baja Peninsula in Mexico, they are particularly docile after giving birth and breeding. They’re also friendly to other species and will sometimes protect seals and dolphins from being attacked by killer whales, a behavior that has been noted around the world. Humpbacks are curious and will often approach nearby boats, sometimes swimming under or near the boat for periods of time. They’re known for their dramatic displays of breaching the surface, often leaping out of the water, and also slap the water with their fins or tails.

There are currently about 360,000 sperm whales around the world. They can reach up to 67 feet in length, but average just over 50 feet, and can weigh up to 63 tons. Sperm whales can live for more than 70 years, and feed mainly on medium-sized deep sea squid but also feed on fish, skate and octopus.

Sperm whales have a very large, block-shaped head, and a blowhole located near the front of the head a little to the left side. For this reason, when they blow, their spray blows forward and is slightly angled. Instead of a dorsal fin, there are a series of ridges on the whale’s back. Their skin is dark gray and wrinkly, like a prune.

Female sperm whales, calves and juveniles remain in their breeding grounds near the equator year-round. They form “family groups” with about 10 – 20 other females, and together they care for their collective young. Only the largest, strongest males can enter the breeding grounds. The remaining males roam the globe, sometimes forming groups with other males of a similar age. Sperm whales can be seen year-round along the California coast, and reach their peak from April to mid-June, and then again from the end of August to mid-November. They can be spotted alone or in groups with other males.

A much smaller species, minke whales average 23 feet in length and weigh about 5 tons. The body is black or dark gray on top and white underneath. Minkes have a white band on each flipper, a dorsal fin and two blowholes. These whales live up to 50 years.

Minke whales migrate to the North Pole in the spring, and back down towards the equator during fall and winter. Breeding takes place during the summer months. The population of minke whales that migrate through California is the “O stock” (short for Okhotsk sea, located in the west Pacific). They feed mostly on krill.

Minke whales are a somewhat rare sighting in the area but are spotted from time to time. They can sometimes leap out of the water and are very fast swimmers.

Blue whales used to flourish worldwide, but were hunted to near extinction during the twentieth century. Today, there are between 10,000 and 25,000 blue whales worldwide. Blue whales are usually seen off the coast of California between May and October when they come through to feed on the abundant krill.

The blue whale has a long, slender body reaching up to 98 feet in length, and weighs up to 190 tons, making them the largest animal to have ever existed. Their blue-grey coloring becomes lighter on their underside, and they have a flat head and small dorsal fin. Blue whales can live up to 80 years, and their diet consists mainly of krill. Very little is known about mating behavior and breeding grounds for Blue whales.

These whales can swim at high speeds of up to 30 mph, and sometimes chase or race each other. Even though they rarely breech, they are spectacular to see in person.

Fin whales can grow to be 70 feet long and can weight up to 70 tons, making them the second largest animal on earth, after blue whales. They are also long and slender like blue whales, and they also have a flat head. Fin whales are dark in color, have a dorsal fin, and eat mostly krill but also small fish. They prefer to travel in small pods of 2 – 10 whales, so they are often spotted in groups.

Fin whales love to stop and feed in the the area around the Channel Islands, and can often be spotted between November and March. They’re also fast swimmers, reaching speeds of almost 15 miles per hour.

In addition to our largest fellow mammals, there are plenty of other amazing smaller marine mammals that you can spot on your whale watch. 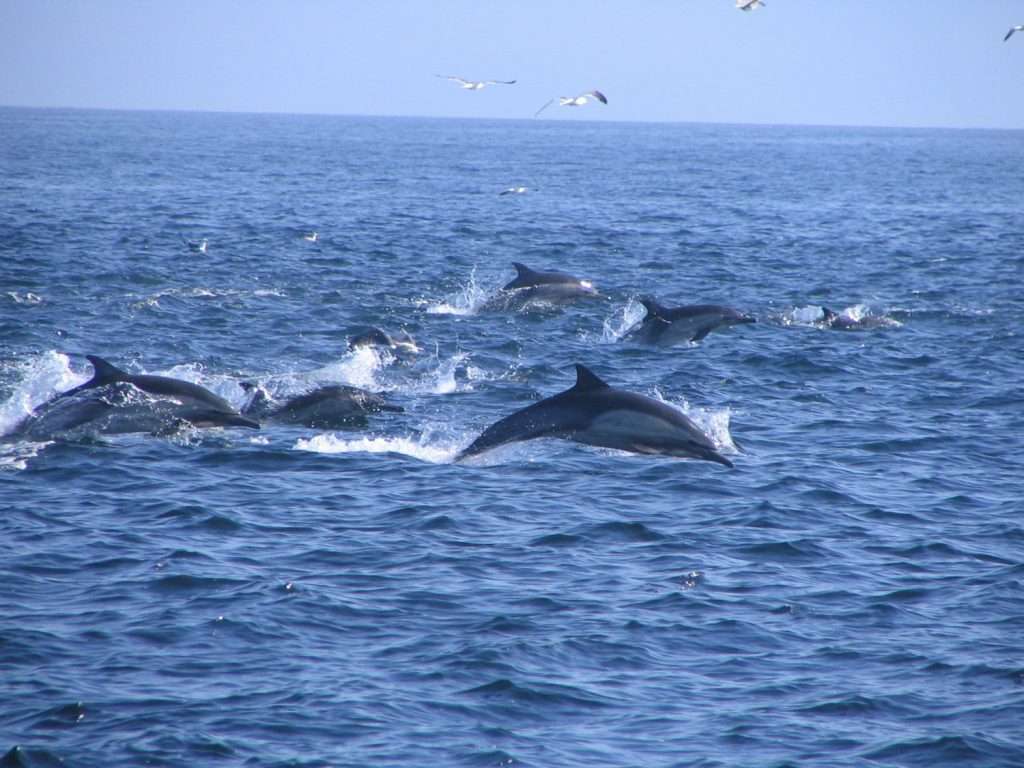 Feeding on anchovies and other small fish, dolphins are often seen following the small schools around as they try to escape these fast and agile mammals. You can also sometimes watch them leap and dive as they appear to show off for humans. Extremely intelligent and highly social, dolphins often like to ride the bow waves on moving boats, sometimes for long distances.

California sea lions just love the Channel Islands. San Miguel Island alone is home to over 80,000 sea lions. It’s the perfect place to breed, play, lounge and sleep in the sun, with plenty of food available. Sea lions inhabit all of the islands and can also be found along the coast. They live up to 17 years in the wild, can grow to almost 8 feet in length, and can weigh more than 600 pounds. Their pups are usually born in June. The easiest way to see Sea Lions is on our Wildlife & History Kayaking Tour

Sea Otters can live over 20 years in the wild. They can reach nearly 5 feet in length and can weigh up to 100 pounds. Once nearly hunted to extinction, Sea Otters are making a comeback, through conservation efforts, and can sometimes be seen around the Channel Islands.

Pacific Harbor seals have spotted coats, can reach up to 6 feet in length, and can weigh as much as 300 pounds. They can often be spotted sunning on the rocks near the shore. They have a wide range north of the equator in both the Atlantic and Pacific oceans. Like sea lions, harbor seals occupy all five of the Channel Islands. Their pups are usually born between February and April.

The Channel Islands provide critical habitat for northern elephant seals, and they inhabit several of the islands. Usually gray, tan or brown, the males can grow to over 13 feet long and can weight up to an impressive 5,000 pounds, while the females reach 1,700 pounds. Mature adult males can be spotted by the large, fleshy proboscis on their snout. They spend most of their time in the water feeding, but occasionally come to land to reproduce or molt.

We’re strong supporters of environmental conservation, so we always practice the following common rules on our whale watches to help keep our marine mammals safe and thriving – we minimize speed and noise, avoid sudden turns and movements with the boat, and we don’t chase, circle or come between the whales. We never swim with them. All of these measures serve to keep these magnificent creatures calm and focused on their own survival instead of frightened, distracted and disturbed by humans.

We’d love to take you out for your whale watch! For more information or to book a whale watching charter, visit our Charter Tours page.