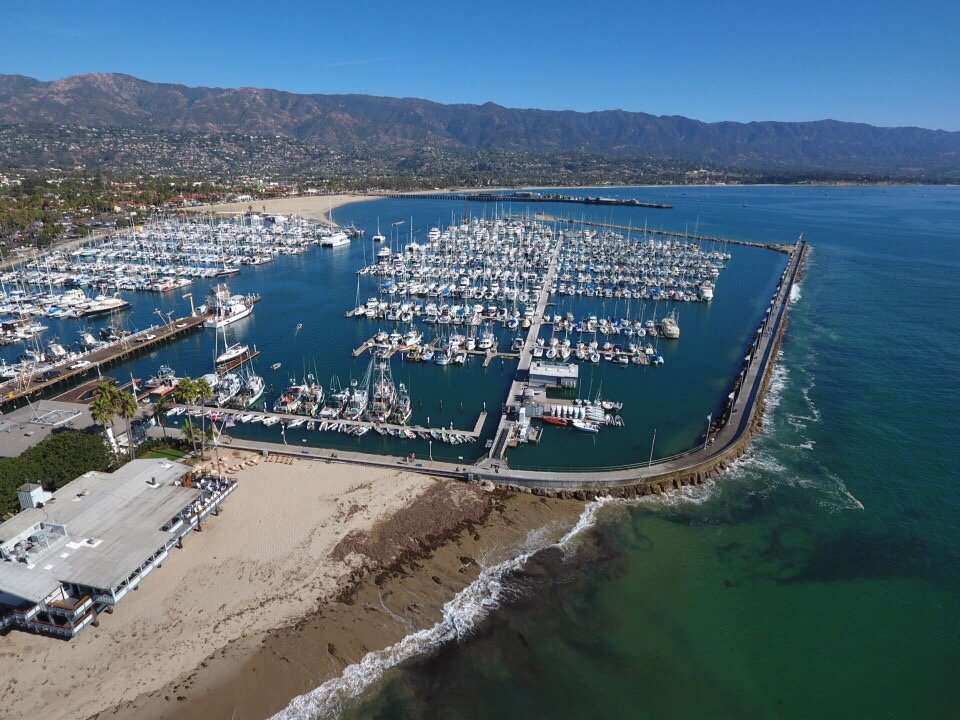 Today, the Waterfront is Santa Barbara’s crown jewel – a prosperous fishing industry, a busy harbor bustling with boats, gentle surf perfect for water sports, beaches stretching up and down the coast, shopping, restaurants and tourist attractions for all ages. It also has a long history rich with Maritime culture and a few individuals whose influence changed Santa Barbara forever.

For at least 13,000 years, the seafaring Chumash Native Americans have called this area home. They were Santa Barbara’s first residents, and some historians have speculated that the Chumash may have been among the very first humans to populate North America, having arrived by boat instead of on foot. They were masters of the ocean and frequently traversed from the mainland to the Channel Islands, 45 miles away from Santa Barbara’s shores. The long journey by paddle boat played a significant role in their culture. To become a warrior in the Chumash tribe, a young man would build a special wooden plank boat, called a Tomol, and then set out on the ceremonial pilgrimage, alone, to Limuw (now known as Santa Cruz Island).

The Spanish called Santa Barbara home for over 200 years, beginning in 1542 when Juan Cabrillo, the first European to navigate the coast of California, sailed up the Pacific on the San Salvador, through previously uncharted waters. He claimed lands for Spain all along the coast, including Santa Barbara. Missions sprung up all over California, built by the Spanish Franciscans, and Santa Barbara’s Mission was the tenth, finished in 1786. The objective of the missions was to convert, educate and transform the Native Americans into Spanish colonial citizens. The Mission buildings, and others from the time of the Spaniards, are still standing all over the city. The Old Mission, located at 2201 Laguna Street, can still be toured.

When John Peck Stearns arrived in Santa Barbara in 1867, he had no way of knowing that just a few years later he would go down in history for transforming Santa Barbara from an isolated, hard-to-reach outpost into a thriving port. His plan was to open a lumber mill, which he did at the end of current day State Street. But at that time Santa Barbara had no railroad, no highway, not even a landing pier. Passengers and cargo arriving to Santa Barbara had to be loaded into small rowboats and then rowed ashore, through the breakers and the kelp, to reach the city. This created a significant problem for Stearns and his mill, as well as everyone else in Santa Barbara, and kept the city remote.

A small pier was built in 1868 to address these problems, but it was very small and was too shallow for the coastal steamer ships to dock. It also required “chapala,” which meant splashing about in the water or wading, in order to board or deboard. That is how Chapala Street, where the pier was located, got its name.

Stearns offered to invest in the wharf to extend it further, but the group refused. Legend has it that, due to this refusal, Stearns chose to build his much larger wharf just a block away from their little pier, dwarfing it completely. Finished in 1872 and named after its builder, Stearns Wharf became the longest deep-water pier between Los Angeles and San Francisco, transforming the city of Santa Barbara into a commercial and cultural hub.

Over the years, Stearns Wharf has had numerous flirts with disaster:

1878 – During a strong storm, a Chinese ship crashed into the wharf, nearly destroying it. Later that same year, the wharf was crippled by a tornado, requiring extensive repair.

1887 – Overuse from the army caused the wharf to weaken and almost collapse.

1921 – During the Potter Fire, embers landed on the wharf and started burning, causing damage. The fire was safely put out before the wharf burned.

1973 – The Harbor Restaurant caught fire in the pre-dawn hours, destroying the restaurant and closing the wharf for eight years.

1998 – 420 feet of creosote-preserved timbers on the wharf burned during the Moby Dick Fire, destroying three businesses.

Despite all of these setbacks, the Wharf recovered each time and Santa Barbara continued to thrive. Even today, Stearns Wharf is the longest continuously working wooden wharf in the state of California. It is also visited by over 6 million people each year, making it Santa Barbara’s #1 tourist attraction, lined with souvenir shops, restaurants, ships and plenty of fishermen.

Santa Barbara Harbor has something in common with Stearns Wharf – just one man initiated its creation to solve a personal problem. Major Max Fleishmann, a veteran from WWI, moved to Santa Barbara in the 1920’s. He loved Santa Barbara but, just like John Stearns, he had a problem that hadn’t been addressed by the city – he needed to moor his 218 foot yacht and keep it safe from storms, which was not possible on the exposed waterfront at that time. Fleischmann offered the city $250,000 to build a breakwater, with the agreement that he would be allowed to moor his yacht. The city agreed and matched his contribution. They began quarrying stone from Fry’s harbor on Santa Cruz Island, and despite the Coast Guard concluding that the present day location was not ideal, construction went ahead and was completed in 1929. Santa Barbara Harbor became a refuge for ships of all sizes from the area’s winter storms. There are varying accounts of what Fleishmann ultimately paid to finish the harbor, but it is between $250,000 to $450,000.

In the late 1930’s leading up the WWII, the US Navy took control of the Harbor and stationed a destroyer off the current day fishing pier. The majority of the buildings located in the Santa Barbara Harbor are part of the original Navy buildings such as the armory, where the Paddle Sports Center is located, as well as the administration and mechanic buildings.

A largely unknown fact about WWII: the only location on the US Mainland that was hit by the Japanese is just north of the Santa Barbara harbor. A Japanese submarine shelled a small oil field near the present day Barcara Resort.

Years after the war, the area was decommissioned by the Navy and is now a thriving business community with restaurants, shops and maritime businesses.

Santa Barbara Harbor is a gorgeous expanse of boats with the mountains and the ocean in the background, attracting tourists and locals alike to walk, bike, kayak, paddleboard, surf, swim, dine and shop at the Harbor. But the Harbor is also a thriving commercial fishing hub, specializing in Uni, Abalone, Squid, Rock Fish other creatures from the sea. It’s serious business – in 2013, over 111 million pounds of seafood was landed in the Santa Barbara Channel, totaling almost $50 million in revenue. 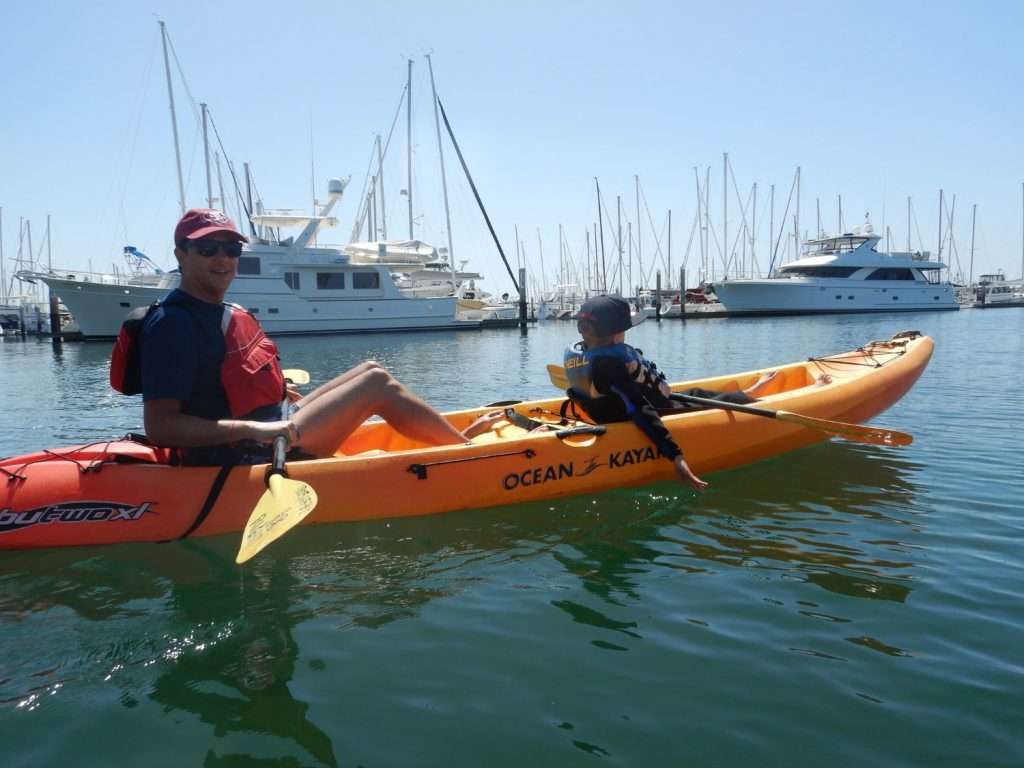 With the exception of sailing, recreational water sports didn’t appear in the Harbor until the 1980’s when Santa Barbara Water Sports opened a windsurfing company. In 1993, Mark Olsen bought the business, added kayaking to the offerings, and relaunched as Paddle Sports of Santa Barbara (PSSB). In 2001, he sold the business to Mark Hyatt, who continued to spread the joy of recreational water sports on the waterfront, and by 2009, included Stand-Up Paddle Board (SUP) rentals in his offerings.

But Mark Hyatt’s influence on the water sports community had a much farther reach than just Santa Barbara – he sold PSSB in 2010 and went on to spread his passion far and wide as a rep for Ocean Kayak, helping them catapult the sport of sit-on-top ocean kayaking into the mainstream.

We were the lucky partners who took over operations from Mark in 2010, and renamed our company Paddle Sports Center. We are proud to continue the tradition of contributing to our community – we’re passionate about being on the ocean and we strive to share that with as many people as possible. Soon after we bought the shop, we came up with the idea to provide paddlesport fitness memberships to the community. The idea was so well-received it’s been copied by other rental shops in other communities, and we couldn’t be more thrilled. You can read about our fitness memberships here. Today, the waters of Santa Barbara are home to all kinds of water sports, and is the perfect place to surf, kayak, paddle, kite surf, sail, swim or snorkel, with gentle waters and gentle surf in the Channel.

You can learn more about the history of Santa Barbara and the ecosystem of the Channel on our Wildlife and History Tour – a gentle 2-hour paddle through the Harbor and the Wharf where you can experience these historic sites up close and learn about the teeming wildlife on the ocean and shores. You’ll also get the best view of Santa Barbara – looking back at the city’s dramatic geography from the ocean. The tour leaves daily at 10am, 12:30pm and 3pm. Learn more about the tour and register here.